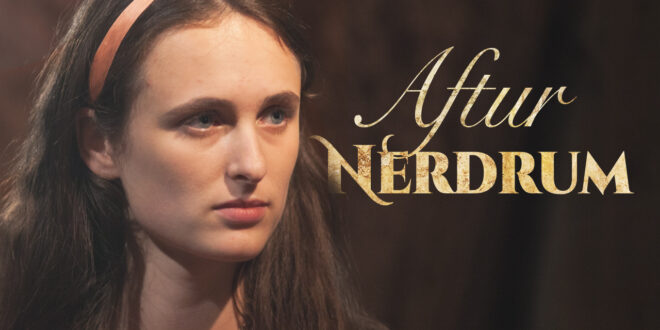 Herland Report: Aftur Nerdrum’s production of her father’s play The Last Days of Immanuel Kant is the topic of this month’s Cave of Apelles, produced by Bork S. Nerdrum.

Ever since she was a child listening to the audiobook recording of her father’s play, Aftur Nerdrum has wanted to see it staged, writes Carl Korsnes.

Now, she joins Jan-Ove Tuv to explain the process of how she managed to stage the very first performance of the play in Norway.

The Rage of the Kantians

The Last Days of Immanuel Kant is a play by Odd Nerdrum, where the philosopher Kant is confronted with the consequences of his aesthetics. In the play, it becomes clear that the reason for Kant’s rigid duty-oriented philosophy can be traced back to a denial of his own homoerotic longings.

The play was released in the early 2000s and was supposed to be performed at the National Theatre in Norway. However, the performance was canceled because Kant experts were upset about how the German philosopher was portrayed in the play.

– It was disrupted because of this man with power in the academy, who said it was the most despicable thing he had ever read, explains Aftur Nerdrum.

When she learned that it was not put up at the National Theatre after all, she got upset and decided to take matters into her own hands.

– I thought it was ridiculous that no one had put it up yet, because it is such a great play with such powerful psychological depth.

– How do you turn this into something that works on a stage, asks Tuv.

Aftur Nerdrum explains much of the hard work that lies behind every single scene in the play, which is available on Vimeo with English subtitles.

One scene was particularly challenging for the director, where nearly all the characters appeared on the stage simultaneously: Kant complaining to Lampe, Knott drinking and laughing, and the student flirting with the made — all at once.

– Yes, it was so much chaos in the beginning, and although it seems like it’s chaos now on stage, it’s organized chaos, responds Aftur Nerdrum.

Jan-Ove Tuv is reminded of a relief which at first to him appeared as a total mess. Then, after analyzing it closer, he realized that it was solidly composed.

Stored in the Unconscious

At first, Aftur Nerdrum thought that The Last Days of Immanuel Kant was a piece written by Ibsen, and she became somewhat disappointed when she learned that it was written by her father.

– I was a bit disappointed because I thought ‘now Ibsen has really done it’, because he was a bit more vulgar in this play, she says.

She shares memories from her childhood, and how her father used to listen to audiobooks of Ibsen’s plays all day long, while painting and discussing them.

– Obviously, he would have all that information stored in his unconsciousness when writing The Last Days of Immanuel Kant. That’s a reason why it’s so important to read and include your life with the things that you want to do yourself, because then, it’s stored in the unconscious, she says.

Jan-Ove Tuv points out that Kant has a character development in the play. At first he is this brutal, puritanical, obnoxious philosopher who yells at his servant, and then he ends up being this vulnerable, dying man, who displays human feelings.

– When I heard the play for the first time, when I was nine years old, I had huge sympathy for Kant. […] I saw him as a victim, because that’s what he is. He has been in denial because his feelings do not represent the society, but they don’t even represent his beliefs. It’s just crazy how much he has had to go through, she says.

Jan-Ove Tuv and Aftur Nerdrum agree that the portrayal of Kant in the play is not as negative as some have criticized it to be.

– Some people see him only as this person that my father ridicules. But actually, my father gives him life, she argues.

What Real Tragedy is All About

After directing her father’s play, Aftur Nerdrum claims that she has discovered what real tragedy is all about and that one can boil it down to a few sentences.

– Tragedy is basically this: Introducing a character with a mask on […], and then, slowly but surely, this mask falls off, so the character becomes human. And then, in the end, you understand why the mask was on to begin with, and that the mask should have been on the whole time, because then, everything would have been better, Aftur Nerdrum explains.

And surely, Kant starts out in the play as a person lying to himself and ends up opening up about his suppressed passions. Given the tragic outcome, Tuv and Nerdrum agree on the following:

He should have kept his mask on.