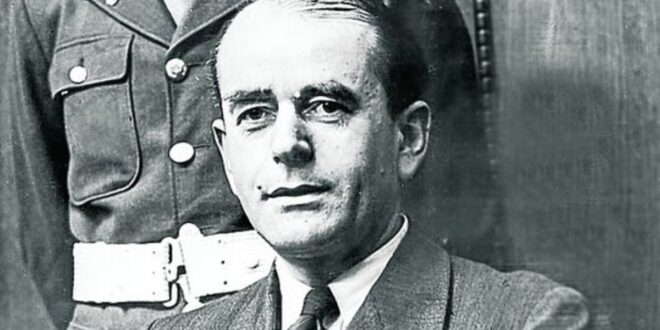 We know about the thugs and sadists who surrounded Adolf Hitler. But architect Albert Speer was also close to Hitler.

Yet he has gained the reputation of being different somehow—intelligent, better than the others, and not directly involved in the Nazi cabal.

Ever since the appearance in 1944 of F. A. Hayek’s masterpiece, The Road to Serfdom, it has been generally accepted that it is always “the worst” who get to the top in an interventionist/socialist society. But so do some of the best and the brightest, writes Bettina Bien Greaves for Economic Education.

Contributing editor Bettina Bien Greaves was a longtime FEE staff member, resident scholar, and trustee. She attended Ludwig von Mises’s New York University seminar for many years and is a translator, editor, and bibliographer of his works.

Adolf Hitler’s associate Albert Speer: Speer was among the top National Socialists put on trial at Nuremberg. There he incurred the wrath of his co-defendants by blaming Hitler and admitting personal guilt for having contributed to his evil regime. This sincerity on Speer’s part may have saved him from the hangman’s noose, for when the penalties were announced, he was not condemned to death, but “only” to twenty years in Spandau prison.

In his two books (Inside the Third Reich and Spandau), both based on notes written in prison and smuggled out, he portrays himself basically as “unpolitical” and generally unaware of the Nazi atrocities. But now to set history straight, we have Gitta Sereny’s account.

Sereny, Austrian-born, educated in France and England, and married to an American, has lived for years in London and is a British journalist.[1] Into That Darkness, her book about Franz Stangl, Nazi Commandant of the Treblinka death camp, attracted Speer’s attention when it was published. He wrote Sereny in 1977, and after some correspondence and months of lengthy phone calls, they collaborated on a profile of him for the London Sunday Times Magazine. They spent almost three weeks in conversation working on the profile and in the course of this decided to work together on a book.

Under Sereny’s relentless questioning, Albert Speer explored the past, trying to discover the truth which he had unconsciously kept hidden even from himself. Sereny gained respect for his sincerity in his personal “battle with truth.” Four years into their relationship, in September 1981, Speer died.

Sereny decided to complete the book alone and proved herself a skillful sleuth. She interviewed every friend and associate of Speer’s who agreed to see her. In time Sereny found out a great deal about Speer, his life, family, friends, emotions, ideas, and the Nazi regime. This prodigiously researched book is a remarkable tour de force—it is biography, history, psychoanalysis, and detective story all combined.

Speer was bright, ambitious, hard-working, and energetic, but by his own account not a particularly brilliant architect. Yet, he was an exceptional person—capable, disciplined, thoughtful, conscientious, resourceful, and talented, as evidenced by his account of how he survived twenty years of confinement at Spandau. But he was also aloof, self-centered, proud, and incapable of close friendship.

Albert Speer’s early success began when, after completing in record time a couple of assignments for the National Socialist Party, he came to Hitler’s attention. Hitler, a frustrated architect himself, felt drawn to this attractive young architect and Speer soon became one of Hitler’s inner circle. Speer was seduced in large part by the opportunities Hitler gave him to fulfill his architectural ambitions—to design grandiose structures, spectacular parade grounds, elaborate government offices, and even the entire city of Berlin with a massive triumphal arch and an ostentatious domed hall.

Adolf Hitler’s associate Albert Speer: In the summer of 1941, however, Speer turned to war work and erected factories all over Europe for war production and air raid shelters. He also directed the repair of bomb-damaged transport facilities in the conquered East. Then in February 1942, Speer was named Hitler’s Minister of Armaments and Munitions Production. Speer’s efficiency in planning and organizing production, which had been demonstrated in his construction projects, made him invaluable to the war effort. He became No. 2 in Germany in terms of power and authority.

Thus Albert Speer, one of the best and brightest, joined the “worst” at the top of the Nazi hierarchy. As Minister of Armaments he had to use great ingenuity to acquire workers and keep armament production going during the war.

Millions of forced laborers were brought from the east, from concentration camps, and from German-occupied territories to work long hours, often under dreadful conditions, in the plants he willingly controlled. His use of forced labor was the basis for the principal charge against him at Nuremberg.

In spite of his powerful positions and his close association with Hitler, Speer claimed at Nuremberg that he had always remained ignorant of most of the Nazi crimes.

After Kristallnacht (November 9, 1938) when Jewish synagogues, shops, and homes were burned, he admitted only to having been disturbed by the disorder of broken windows and smoldering buildings; he claimed no knowledge of what such maltreatment of the Jews foretold. He admitted that he should have known but, teflon-coated to the end, he succeeded in convincing himself and others that he had known little about the Nazi brutalities.

Sereny was determined to discover the true extent of his knowledge about the maltreatment of forced laborers and about the persecution and extermination of the Jews and other minorities. She became convinced that he was concealing the truth even from himself. For weeks, with his too pat answers to all such questions, well-honed and practiced over years, he succeeded. Only at the very end did she ferret out a confession from him which, she believed, if stated at Nuremberg would have condemned him to death.

1.   Gitta Sereny’s father died when she was just two years old. She and her older brother were raised by their mother, Margit Herzfeld Sereny, in chaotic, inflationary Vienna of the 1930s. In 1938 their mother remarried and became Mrs. Ludwig von Mises. As a student and friend of Professor and Mrs. Mises, I came to know Gitta personally.

Previous The Liberal hatred of “Merry Christmas” and Religious Traditions
Next To a culture of woke snowflakes, Christmas has become yet another trigger word