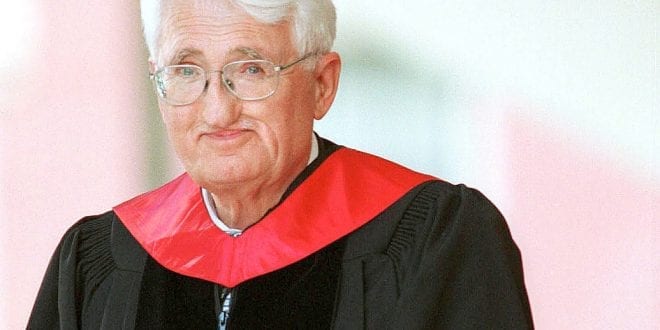 Herland Report: What happens when a leading, atheist thinker changes his mind and advocates for Christian ethics? To follow the development of Jürgen Habermas has been a remarkable journey.

The famous atheist now states that Christian ethics has a greater role to play in society than many secularists previously thought:

It has the ability to motivate individuals to do good and act in solidarity with the weak, which may help us in a time where the deterioration of morality is rampant in the West, states Hanne Nabintu Herland in her column in World Net Daily, one of the largest and most influential American conservative outlets. (Photo: Jürgen Habermas, The Guardian)

For decades, the leading philosopher and one of Europe’s most famous atheists, Jürgen Habermas has emphasized the need for moral development in the West.

He sought for the answers to how to live the best possible life and be a fruitful citizen who cares for others in the community. His thinking was initially considered neo-Marxist, following along the lines of the radical Frankfurt School that heavily criticized the bourgeoisie, traditional values in Europe.

Yet, Habermas came to a point where he radically departed from much of his previous Marxist view. He began writing in a positive manner about Christianity, stating that religion seems to have the ability to motivate individuals to do good in a manner that secularism cannot.

This change of heart regarding the need to reinvigorate Christian ethics in secular societies, has dumbfounded the European intellectual elite since Habermas for decades was one of the architects of tough, atheist European secularism.

It is a taboo within the politically correct New Left circles that currently dominate the university paradigm in the Western hemisphere. Hardly anyone among the New Left progressive intellectual elites wish to talk much about the fact that Habermas has become an advocate for the need to respect Christian ethics.

He has even written books together with then Pope Benedict XVI, addressing the need to reemphasize the Christian ethics in the West as the basis for rational thought.

When the neo-Marxists first appeared after World War II and pushed their ideology into the 1960’s with the student rebellions, many felt that the New Left’ strategy of repressing the views of the traditionalist majority was a good idea.

Many intellectuals followed along the line of Nietzsche, Freud and other religion-haters who prophesied that the more modern man would become, the less he would need religion as “the opium of the masses” since “God is dead”.

It turned out, after Nietzsche went mad and died in a mental hospital, that the society he prescribed as the utopian world without religion turned into an extreme secularist tyranny in which the Jewish Ten Commandments were removed from society and selfishness, materialism and hedonism took its place as normative philosophies. “Do as you wish, forget about honesty, who cares about tomorrow”. It became unfashionable to speak about “Don’t lie, don’t steal, don’t envy others, don’t kill”.

We live in the results of Nietzsche’s impact on the culture, first on the Third Reich and then in the cultural revolutions in the West:

The fragmentation of family bonds, lack of solidarity, lack of respect for parents and the elderly, lack of empathy, lawlessness, ethnic strife and the legitimization of an egocentric way of life.

It has been peculiar to watch the changes in Habermas’ writing, keeping in mind that he is one of Europe’s most famous atheists. It seems that Habermas remedy to the lack of solidarity that permeates Western extreme-liberal thinking is to call for a new type of reflection that does not exclude the relevant moral contribution of religious ethics.

When he received the Holberg Price Award in Norway in 2005, he addressed the need for a renewed respect for traditional Christian morality.

Traditional science distinguishes sharply between faith and knowledge and takes a naturalistic position that devalues all categories of knowledge that are not based on empiricism, natural laws and causal explanation. This singular emphasis on physical science makes it difficult for us to understand the complexity of the human spirit, he says. A more practical understanding of what it means to be an individual with responsibility for one’s actions is particularly essential.

In the Dialectics of Secularization: On Reason and Religion, Pope Benedict XVI and Habermas assert the importance of religion not being isolated in the private sphere. Instead, respect for historical Western norms should be reinstated to curtail the trend of weakening solidarity and empathy. The West needs to gather moral strength from its historic origins. It is an urgently needed ideological shift.

Religious ethics have a role, a moral role, to play as the ethical foundation of society. Religious perspectives represent valuable contributions to strengthening the social community with a new sense of solidarity, kindness, unselfish acts and care for those who need it most.

Hanne Nabintu Herland is a historian of religions and bestselling author. She is the founder of The Herland Report Scandinavian news site, TV channel on YouTube and Podcasts which have millions of readers/viewers yearly. This is a great place to watch interviews with leading intellectuals, thought leaders from across the political spectrum. Herland’s books include Respect, Det Nye Babylon, The Culture War. How the West lost its Greatness, and her latest, New Left Tyranny. The Authoritarian Destruction of Our Way of Life is available on Amazon, Barnes and Noble, across the USA and in 60 countries world-wide. New Left Tyranny shows how the neo-Marxist New Left turned their back on historical Western principles and became a destructive authoritarian force. www.theherlandreport.com
Previous Hva er kapitalisme, egentlig? Og moderne konservatisme? Boken “Tyranni” forklarer
Next Ateisten Habermas: Samfunnet trenger den kristne etikken, empati, solidaritet