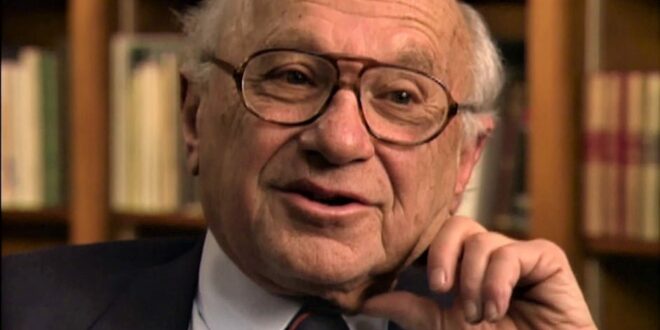 Herland Report: Big Government Special Interests destroys Democracy: In a time where the West is entering an age of socialist totalitarianism, the message of the famous economist Milton Friedman may be revisited.

In 1993, he published a groundbreaking essay on “Why Government Is the Problem,” pointing out that the influence of special interests often ends up overruling the interests of the people, writes Hanne Nabintu Herland, historian of comparative religions and author in her regular WND column.

As politicians and bureaucrats become detached from the reason why they chose to enter politics in the first place – to serve the people – they often end up providing substantial benefits to the few.

Friedman ponders the question of why this is, saying that self-interest is served differently in the private sphere than the public sphere.

Why are government enterprises often less efficient than a private business?  If a private enterprise fails, it loses money and the personal consequences for its owners is great.

They have to sack management and employees, the burden of personal responsibility is ever present. To keep the business going, they must dig into their own pockets.

If the same scenario happened in a governmental enterprise, they have much deeper pockets to draw on and the taxpayer ends up paying for the continuation of an institution that has made very bad choices.

He points to education, lack of protection of individuals from crime, the problem of homelessness as public housing becomes a breeding grounds for crime, highway congestions as proper roads are not built, airport problems as proper airport systems are not built. The solution becomes to steadily rise taxes rather than holding government enterprises accountable.

Big Government Special Interests destroys Democracy: The American political system is too easily exploited. The funding of Congress members by private corporations creates all kinds of self-interest ties. Private corporations may fund the campaign for an individual running for Congress, then have the same person work to amend laws while in office that benefit the same group.

The Congressman or woman may also have stocks or shares in the very same companies that funded his or her campaign and buy shares after having worked to amend laws to the benefit of the same corporation.

With the break-down of national borders and traditional morality, the tax-exemption of global companies and lack of redistribution of wealth, the small transnational economic elite have amassed enormous power onto themselves.

Friedman points out that as the people suffers, not getting their money’s worth for the taxes that they pay, they observe how the government is spending too much on the wrong things. The end result is that government has become a self-generating monstrosity.

Friedman is very clear about his view on politicians and bureaucrats; it is not that these are what one would call bad people. He agrees with the Marxists that the system is the problem. Many are able, public-spirited people who initially enter both politics and government structures in order to improve the nation, yet end up caught in a system that encourages them to make choices that improve personal self-interest instead.

Big Government Special Interests destroys Democracy: “The self-interest of the people in government leads them to behave in a way that is against the self-interest of the rest of us. People who intend to serve only the public interest are led by an invisible hand to serve private interest which was no part of their original intention,” Friedman says.

“I believe our present predicament exists because we have gradually developed governmental institutions in which the people effectively have no voice,” he continues.

As personal responsibility and mechanisms in which politicians are to be held accountable for government spending is evaporating, there is less focus on a balanced economy and ever more favor of more spending. The current debt crisis’ roots lay precisely here: Government spending is much higher than the national revenue can afford. The chosen remedy is to continually raise the debt ceiling and live on money you actually don’t have.

“Something drastic is needed to reverse the direction in which we are now moving,” Friedman says and suggests a solution that would take a major change in the political structure: Term limits for politicians and members of Congress. It would turn the power back to the people and debureaucratize the administration.

The article is from 1993. Friedman would probably turn in his grave had he seen the level of national disaster the very problem he described back then later led to.

Previous The looming Energy Crisis: Why do NATO countries commit Energy Suicide?
Next Up to 65% Increase in U.S. Deaths 2021 Among 18-49 Year Olds, why?