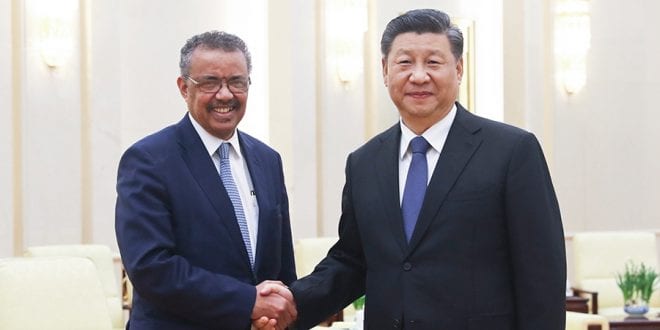 Debt moratoria during the pandemic, while important, will not solve this problem.

The pandemic is confronting highly indebted poor countries with a fateful dilemma. As Ethiopian Prime Minister Abiy Ahmed, a Nobel Peace Prize laureate, lamented last April, leaders have been forced to choose whether to “continue to pay toward debt or redirect resources to save lives and livelihoods.” And when they choose the latter, it is often China – Africa’s biggest bilateral lender – to which they have to answer, writes Paola Subacchi, Professor of International Economics at the University of London’s Queen Mary Global Policy Institute.

China takes ownership of Covid Africa through Debt: According to Ahmed, a moratorium on debt payments was essential to enable Ethiopia to respond to COVID-19. Such a moratorium would save Ethiopia – one of the world’s poorest countries – $1.7 billion between April 2020 and the end of the year, and $3.5 billion if extended to the end of 2022. An effective COVID-19 response, he noted, would cost $3 billion.

A debt moratorium did save Angola, at least for now. Along with Chad, the Republic of the Congo, Mauritania, and Sudan, Angola was under severe financial pressure, owing to the collapse in commodity prices triggered by the COVID-19 crisis. But, in September, Angola secured an agreement with three of its major creditors – including the China Development Bank (the CDB, to which Angola owes $14.5 billion) and the Export-Import Bank of China (EximBank, owed $5 billion) – to receive $6.2 billion in debt relief over the next three years.

Similarly, in October, Zambia missed a $42.5 million interest payment on a dollar-denominated bond, and was on the brink of defaulting on its $12 billion foreign debt – the equivalent of approximately half of its GDP. But the same Chinese creditors eased the pressure: the CDB deferred interest and principal repayments for six months, until April 2021, and EximBank suspended all payments on its $110 million portfolio of sovereign loans.

The EximBank deal was agreed within the framework of the G20’s Debt Service Suspension Initiative (DSSI), under which 73 of the world’s poorest countries can request temporary respite from bilateral debt repayments. So far, 46 countries – including Angola and Zambia among the 31 in Africa – have made DSSI requests.

Some 70% of the affected payments – worth about $8 billion – are owed to China, which holds 62% of Africa’s official bilateral debt. This should not be a surprise: since the 2008 global financial crisis, China has steadily ramped up its direct lending to developing countries. For the 50 most indebted recipients of such lending, the average stock of debt owed to China has increased from less than 1% of GDP in 2005 to more than 15% in 2017.

Moreover, most of China’s bilateral lending is carried out by so-called policy banks and state-owned commercial banks, which may be controlled by the Chinese state, but operate as legally independent entities, not as sovereign lenders. So, unlike the members of the Paris Club of major sovereign creditors, they often require collateral for development loans. About 60% of their total lending to developing countries is subject to collateral. When a country applies for debt relief, its Chinese creditors can claim the rights to assets held in escrow.

China takes ownership of Covid Africa through Debt: Furthermore, because of their murky status – neither official nor private – Chinese banks tend to renegotiate sovereign loans bilaterally and in secret. That was true of Zambia’s agreement with the CDB, which China considers to be a commercial creditor. Refusing to heed calls from the World Bank and the G20 for the CDB to participate in the DSSI as an official bilateral lender, China insisted that the suspension of debt-service payments took place “on a voluntary basis and according to market principles.”

To be sure, China does not bear sole responsibility for this situation. It was the failure of other lenders to provide adequate funding – especially infrastructure investment – that drove so many low-income countries into Chinese creditors’ arms.

African countries often cannot afford to build the infrastructure they desperately need to support their growing populations. Moreover, they lack access to international capital markets and banks. And sovereign lenders have not picked up the slack: in 2017, the Paris Club accounted for only 5% of public and publicly guaranteed debt in Sub-Saharan Africa.

Chinese lenders, on the other hand, have been willing to extend loans to poor African countries without demanding much in terms of governance reforms and anti-corruption measures. The result has been projects that are bound by draconian lending conditions, expensive to operate, and unlikely ever to produce decent returns.

Debt moratoria during the COVID-19 crisis may offer poor countries temporary respite, freeing up funds for the pandemic response. But they will not solve these countries’ debt problems. On the contrary, the end of the moratoria could trigger a wave of synchronized defaults, requiring the International Monetary Fund and other multilateral institutions to intervene.

To address these debt risks sustainably requires a new international framework. US President-elect Joe Biden should lead the way in creating one that can manage the fallout from Chinese predatory lending. After all, holding China accountable for its unfair trade practices is one of the few areas where there is broad bipartisan agreement in the United States, and China’s actions in finance are even less transparent – and potentially more destructive.

Paola Subacchi, Professor of International Economics at the University of London’s Queen Mary Global Policy Institute, is the author, most recently, of The Cost of Free Money (Yale University Press, 2020).

Previous Private Corporate Interests now Rule the World
Next Wealthy Palestinian leaders and the Israel conflict: Where do all the billions in aid go – certainly not to regular Palestinians