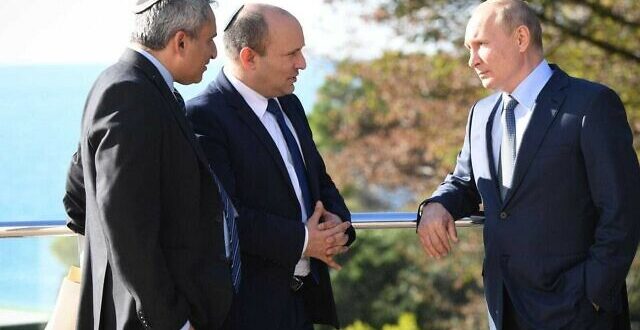 Herland Report: Israel stays close to Russia: After the Israeli Prime Minister, Naftali Bennett extended his visit with Russian President, Vladimir Putin, the first meeting between the leaders is seen to keep the good relationship between the two nations on track.

President Putin was known for being close to Netanyahu, who visited Moscow repeatedly in the wake of the dramatic weakening of the United States on the global scene.

The steadily diminishing U.S. influence in the Middle East, as a result of the catastrophic neo-con strategy failures and horrifying wars that has caused the greatest humanitarian catastrophies since World War II the past years, has strengthened the respect for Russia in the region.

It seems hard to find even one Middle Easterner who speaks favorably about the United States, unless he is somehow on the U.S. payroll.

Israel stays close to Russia: The catastrophic developments in the Middle East represents a true challenge to Israel, a nation that borders these nations and steadily feels the inbred hatred towards non-Muslims so well known to those who know the region. The neo-con movement has not been able to solve the long standing issues.

Afghanistan mess represents only the latest of the failures of the Neoconservative (neo-con) ideology that has permeated American thinking post-Soviet: The idea that America was to rule the world in brute force, using its military to implement regime change in many nations and prevent the rise of any other power, especially Russia, that could serve as a constraint on American unilateralism.

With the failure in Afghanistan –  whether Taliban represents a secret U.S. ally to allow Islamists to attack Russia from its Northern borders or not, whether it means new U.S. supported ISIS wars further East or not as Putin warns that thousands of ISIS mercenaries are gathering in the Northern parts of Afghanistan – the American neo-con movement has completely lost the respect of millions around the globe, defeated in all its public goals.

Israel stays close to Russia: It lost in Iraq, it lost in Libya, it lost in Syria and it lost in the outspoken aim of making Afghanistan a better country.

General Clark described the neo-con takeover as a political policy coup, a change in American foreign policy that never even was discussed in Congress. In his book, A time to lead: For duty, honor and country, he explains the shock and horror of how the neo-cons took power and ruthlessly overran the traditional American view on the aim of its foreign policy.

Israel stays close to Russia: Due to Bennett’s extended talk with Putin in Sochi last week, which lasted over six hours, Bennett had to remain in Russia over Shabbat.

Times of Israel reports: “The meeting was warm and positive and dealt with a series of issues of importance to the two nations,” said a statement from Bennett’s office after the two leaders met at the Black Sea resort town for their first face-to-face talks since Bennett took office earlier this year.

The statement said the official meeting at Putin’s residence lasted some five hours after which the two leaders “went outside to speak on the balcony of the residence and then walked through the paths of the grounds toward the sea.”

Bennett later called the talks “excellent,” and said they were “extremely in-depth.”

“Russia is a very important player in our region, a kind of neighbor for us in the north,” Bennett said referring to Russia’s large military presence in Syria.

Bennett and Putin also spoke on the phone Saturday evening after the Israeli premier spent Shabbat in Sochi, following the leaders’ talks in the Black Sea resort town the day before, writes Times of Israel, adding that Bennett was invited by Putin to visit St. Petersburg at a later occasion:

“According to the Prime Minister’s Office, Putin phoned Bennett after Shabbat ended at nightfall to thank him for the “good and in-deph meeting” on Friday. The prime minister thanked Putin for hosting him and said their talks would help bolster ties between the countries, the statement from Bennett’s office said.”

Previous ‘Cancel culture’? In Russia it created a communist holocaust – WND
Next The rise of Russia: United States is no longer Master of the World