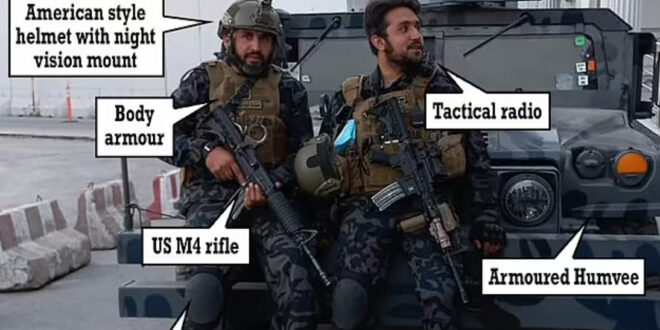 Herland Report: Eric Prince Private Contractor Blackwater: As the public is informed about the official American military moving out of heroin producing Afghanistan, is the new phase in the geopolitical powerplay all about private contractors taking over, working alongside the Taliban?

Or is the American army simply leaving the extremely lucrative heroin production in Afghanistan that is said to produce around 90 % of the world consumption behind, handing the control of this billion dollar trade peacefully to a hostile Taliban?

The taking over of American private mercenary armies – with forefront very successful private contractor Eric D. Prince – Blackwater, Academi and more – has long been a trend.

Standing government armies are under martial law accountable to military ethics, body bags requiring military funerals, inefficient and bureaucratic military systems, constantly under public scrutiny and in need for extensive funding and so on.

The work of private contractor armies, still funded by U.S. taxpayers, are much less visible in the public, mainstream terrain. And not to be held accountable to generals, military leaders, martial ethics and so on.

Are we merely watching the new Blackwater plan for the newly formed Islamic Emirate of Afghanistan unfold as private contractor armies are hired by the United States to fix the Afghanistan quagmire, just as ex-Seal and the founder of Blackwater, the godfather of private American armies, Eric D. Prince suggested in 2017?

Afghanistan -Eric Prince Private Contractor Blackwater: In 2017, the new Blackwater plan for Afghanistan as private contractors felt they could help in the Afghan quagmire, attracted then President Donald Trump’s attention.

The idea was that the United States should hire a private army to fix Afghanistan, according to The Atlantic: “Not surprisingly, the private-military industry is behind this proposal. Erik D. Prince, a founder of the private military company Blackwater Worldwide, and Stephen A. Feinberg, a billionaire financier who owns the giant military contractor DynCorp International, each see a role for themselves in this future.”

“Their proposal was offered at the request of Steve Bannon, President Donald Trump’s chief strategist, and Jared Kushner, his senior adviser and son-in-law, according to people briefed on the conversations…Secondly.. set rules of engagement in collaboration with the elected Afghan government to make better decisions, faster. Troops fighting for their lives should not have to ask a lawyer sitting in air conditioning 500 miles away for permission to drop a bomb.”

He lists five, much more efficient ways in which then President Trump should fix Afghanistan. Then Trump recruited Eric Prince for the job connected to how to solve Afghanistan, as told by The New York Times.

Steve Bannon and Trump’s son- in-law, Jared Kushner, reportedly asked Prince to lay out his ideas and later laid the ground for the peace treaty with the Taliban. Which President Biden now so quietly honors, as his hands may be tied.

In an op-ed in The Wall Street Journal, Prince laid out the plan to do whatever it takes to pacify Afghanistan. He said that: “The Pentagon has already consumed $828 billion on the war, and taxpayers will be liable for trillions more in veterans’ health-care costs for decades to come.”

“More than 2,000 American soldiers have died there, with more than 20,000 wounded in action. For all that effort, Afghanistan is failing…

“First, he should consolidate authority in Afghanistan with one person: an American viceroy who would lead all U.S. government and coalition efforts—including command, budget, policy, promotion and contracting—and report directly to the president. As it is, there are too many cooks in the kitchen—and the cooks change shift annually.”

Afghanistan -Eric Prince Private Contractor Blackwater: Eric Prince is a man with real knowledge about how the real world wars work. He has made it his business to optimize and privatize armies into well-functioning systems that seem to attract governments, who often are stuck with not so efficient and very costly national armies. He knows that the Middle East is much about who pays who.

And among the many young soldiers in the region, being paid better makes many switch sides, turning to private contractors rather than being part of lesser paid national armies.

Prince suggest that a better method than giving “piles of cash” to a wide variety of Afghan lords, as seems to have been the random American method, one should: “A better approach would resemble Gen. Douglas MacArthur’s leadership of postwar Japan. In Afghanistan, the viceroy approach would reduce rampant fraud by focusing spending on initiatives that further the central strategy, rather than handing cash to every outstretched hand from a U.S. system bereft of institutional memory.”

He says that the private company was the instrument of British colonization of India for centuries, “led by a viceroy with monarchical powers and a private army to rule the natives.”

And Prince is no newcomer. From 1997 to 2010, Blackwater reportedly received contracts worth around 2 billion USD from the government, 1.6 billion USD quite unspecified from Pentagon for operations in Iraq, Afghanistan and other places. From 2010 onward, the Prince’ company was awarded several hundred million USD security contracts by the Obama administration.

Afghanistan – Eric Prince Private Contractor Blackwater: Again, what will happen to the extremely lucrative heroin production in Afghanistan that is said to produce around 90 % of the world consumption, remains a question. It is well known that the heroin production soared after the U.S. take-over of the country, which is one of the world’s best climates to grow opium poppies.

Mainstream media reports now state that the “new Taliban” patrolling the streets of Kabul 2021 are somewhat very different from the turban-sandal-AG 47 locals we used to see. They look much more like private armies, rigged with American weapons and military gear.

Daily Mail writes: “Rather than the typical Salwar Kameez and AK-47 slung over the shoulder that has become synonymous with farmer-turned-terrorist Taliban fighters… The attire now appears to be a combination of U.S. military hardware and that use by Afghan forces.. the Badri 313 soldiers seen with U.S. military helmets and sunglasses instead of the usual turban, bullet proof vests over camouflage jackets .. armed with tactical rifles.. the unit appears to be armed with modern sidearms, modern combat boots.. night vision goggles – making them difficult to distinguish from any other country’s special combat units.”

This is much like the last days of the Roman Empire, when mercenary armies began taking over  as the Romans refused to send their own sons to war. It did, of course, not end very well, as the mercenary warlord once loyal to Rome, Alaric, ended up sacking Rome and destroying its might in 410 after Christ. When money is all that counts, and loyalty to country and flag is no more, much can happen.

Afghanistan – Eric Prince Blackwater: Also check out these topics at CNN or FOX News. Other sources may be New York Times, USA Today, the Washington Post or from the British angle, BBC, The Guardian, The Telegraph or Financial Times.