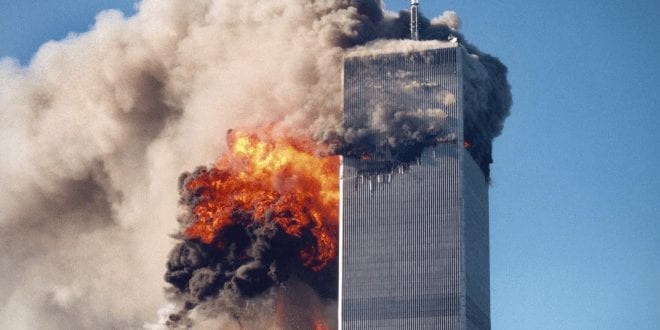 Herland Report: Post 9/11 crimes came the downfall of America: Read Thierry Meyssan’s groundbreaking analysis that cut open the official 9/11 narrative shortly after the Twin Towers fell and the notorious War on Terror was launched. First part here, the second below.

Twenty years after 9/11, the Middle East has gone through a massive wave of ruthlessly bloody wars in country after country, leaving hundreds of thousands dead and millions homeless; economic recession, an unprecedented wave of refugees flooding Europe, as the rampage of violence has left nation after nation in horrid shambles with unspeakable suffering for the civilian population.

One can but imagine the impact these horrendous wars have had on the mental health of young and old Middle Easterners, as the ultra-rich elites fight over who is to own these nation’s oil/gas reserves and natural resources while the local population are mercilessly left deprived of a good life.

At The Herland Report, we have spent years speaking about the violations of human rights in the Iraq war, the Libya war, the Serbia/Kosovo war, the Syria war and now the war in Afghanistan reexamined.

All these wars are closely interconnected to the 9/11, 2001 attacks in New York, as the 9/11 official story became the legitimacy for the aggressive change in U.S. foreign policy. Read more here.

One of the very first to challenge the official 9/11 narrative with extensive references and thereby open a worldwide debate was Thierry Meyssan at Voltaire Network. He is a political consultant, president-founder of the Réseau Voltaire (Voltaire Network). Latest work in English – Before Our Very Eyes, Fake Wars and Big Lies: From 9/11 to Donald Trump, 2019.

Read the second part of his analysis, twenty years later, as history may have proven him more right than wrong:

The essence of his book on the subject at the time was a political science study predicting the evolution of the United States after these crimes.

Post 9/11 crimes came the downfall of America: In the days following the 9/11 attacks, the Bush Administration had Congress vote on an anti-terrorist code, known as the USA Patriot Act.

This is a very large piece of legislation that had been drafted over the previous two years by the Federalist Society (of which Solicitor General Theodor Olson and Attorney General John Ashcroft were members). It suspends the Bill of Rights in cases of terrorism.

At the time of the formation of the United States, there were two opposing groups. The first, around Alexander Hamilton, drafted the Constitution to set up a system comparable to the British monarchy, but with governors instead of nobles.

Post 9/11 crimes came the downfall of America: The second, around Thomas Jefferson and James Madison, only accepted the Constitution after it had been amended to prevent the use of Reason of State. These 10 amendments are called the Bill of Rights.

Their suspension challenges the balance on which the United States was founded. It gives power to the first group, the descendants of the ’Pilgrim Fathers’, the Puritans exiled from England. President Bush is a direct descendant of one of the 41 signatories of the “Mayfower Pact” (1620).

In order to implement the USA Patriot Act, a new department was created, the Homeland Security Department, which brings together various existing agencies. It has a political police force capable of spying on any citizen.

According to the Washington Post, which revealed this in 2011, it has hired 835,000 civil servants, 112,000 of whom are secretly employed [9], making the United States the most Orwellian country on the planet. The way this department works was revealed in 2013 by Edward Snowden.

Snowden not only provided information about the NSA’s foreign eavesdropping system, but also about domestic mass surveillance in the US. He now lives as a political refugee in Russia.

This system, although less documented, is gradually spreading to all Western states, through the ’Five Eyes’ [10] and Nato.

Post 9/11 crimes came the downfall of America: A month and a half after the attacks, Secretary of Defense Donald Rumsfeld created the Office of Force Transformation, which he entrusted to Admiral Arthur Cebrowski. The idea was to change the very function of the Armed Forces. The Rumsfeld/Cebrowski doctrine [11] is a reform as important as the creation of the Pentagon after the 1929 crisis.

This time, it is about adapting to financial capitalism. From now on, the United States will no longer try to win wars, but on the contrary to make them last as long as possible; this is what President Bush’s expression “endless war” means. Their aim will be to destroy local state structures so that natural wealth can be exploited without having to endure political control; as Colonel Ralph Peters summed it up: “Stability is America’s enemy” [12].

This is exactly what has just happened in Afghanistan. The war started there just after 9/11. It was only supposed to last a few weeks, but it never stopped.

The Taliban victory that we have just witnessed was organised by the United States itself in order to make the conflict last even longer. That is why President Biden has just said that the US did not go into Afghanistan to build a state, as it did in Germany and Japan after the Second World War.

Joe Biden had, during his meeting in Geneva with Vladimir Putin, rejected the endless war. However, he has just relaunched it, aligning himself with the Rumsfeld/Cebrowski doctrine like Barack Obama.

None of the conflicts that began after 9/11 have ended. On the contrary, instability has taken hold in Iraq, Libya, Syria, Yemen and Lebanon.

One can of course call these conflicts “civil wars” and accuse their leaders of being “dictators”, or explain nothing at all, but the fact remains that they were stable before Western intervention and that Gaddafi’s Libya and Aoun’s Lebanon were US allies when their misfortunes began.

Vice President Cheney had set up a secret group in the White House to design the development of the National Energy Policy. He was convinced that oil would run out in the medium term.

This is why the United States destroyed states in order to be able to exploit their oil in the long term, but not now. Moreover, the Rumsfeld/Cebrowski doctrine states that one should not fight globalised powers such as Russia and China. On the contrary, they should be given access to the natural resources they have conquered, but they should be forced to pay royalties to the US in order to exploit them.

By publishing a number of internal US military reports, Julian Assange has not revealed any sensitive information. But all these documents show that the Pentagon has never been interested in winning the post-9/11 wars. Assange was persecuted to the point of insanity.

To wage these wars, the Pentagon secretly created clandestine Special Forces: 60,000 soldiers without uniforms [13]. They are capable of assassinating anyone in any country without leaving any trace.

Post 9/11 crimes came the downfall of America: All my predictions have been verified over the last 20 years. Unfortunately, few people have seen how the world has changed.

Most refuse to make the connection between the revelations of one side and those of the other and to see the responsibility of the Western democracies for the crimes committed in the wider Middle East.

The problem remains the same: we cannot admit that the criminal is close to us.

FOOTNOTES
Footnote 1 – 8 is to be found in the first part of the world famous analysis, here.

[10] The “Five Eyes” or Five Eyes is the name of the alliance of services for eavesdropping and interception of global communications in which Australia, Canada, the United States, New Zealand and the United Kingdom participate. in 1941 by the Atlantic Charter.

Post 9/11 crimes came the downfall of America: The level of censorship in social media and search engines is all-time high. Do like thousands of others, subscribe to The Herland Report newsletter here!

Previous China values freedom from chaos – The Chinese Challenge to American Primacy
Next 2020 was pivotal moment for China: US falling behind in massive crisis