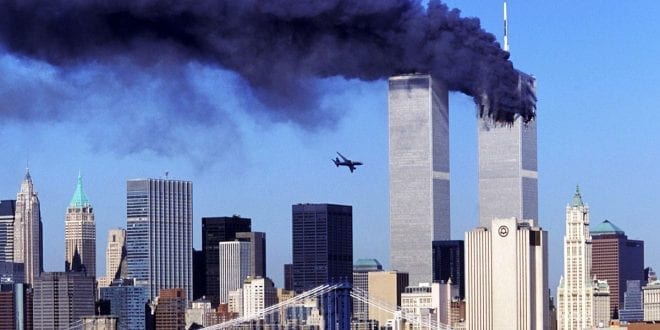 Herland Report: The 9/11 Official Story Crumbles: By challenging the official version of the 9/11 attacks, Thierry Meyssan opened a worldwide debate. But the essence of his book on the subject was a political science study predicting the evolution of the United States after these crimes.

The problem is not how the attacks were committed, but why the US reacted that day by violating its own Constitution, why it implemented in the following days very deep reforms of its institutions that changed its nature, writes Thierry Meyssan, political consultant, president-founder of the Réseau Voltaire (Voltaire Network). Latest work in English – Before Our Very Eyes, Fake Wars and Big Lies: From 9/11 to Donald Trump, 2019.

Thierry Meyssan had predicted the transformation of the American Empire that we are seeing with the planning of the fall of Kabul. Everything he predicted has been confirmed over the last twenty years.

The book was translated into 18 languages and opened a worldwide debate questioning the veracity of the official US narrative.

However, the international press refused to discuss my arguments and launched a campaign accusing me of “amateurism” [2], “conspiracy theory” [3], and “denial” [4].

Above all, the US authorities and their supporters reduced my work to the first few pages of my book: the challenge to the official version of the attacks.

But it is a work of political science aimed at denouncing what these false-flag attacks would make possible: the surveillance of Western populations and the endless war in the wider Middle East.

In this article, I will therefore review what has been learned about these attacks over the past 20 years, but more importantly, I will check whether my predictions from 2002 were correct or not.

The 9/11 Official Story Crumbles: If we are asked what happened on 9/11, we will all visualise the Twin Towers and the Pentagon. We have forgotten many other things, such as the insider trading in the shares of the affected airlines, the fire in the Old Eisenhower Building, or the collapse of a third tower in the World Trade Center.

What is most astonishing is that almost no one remembers that at 10am, Richard Clarke triggered the ’Continuity of Government Plan’ [5].

At that very moment, President Bush and Congress were suspended from office and placed under military protection. President Bush was taken to an air base in Nebraska where the CEOs of the upper floors of the Twin Towers had been since the previous evening [6]; and Congress to the Greenbrier megabunker.

Power fell into the hands of the “Continuity Government”. It was in the Raven Rock Mountain megabunker (’Site R’) [7]. Power was not returned to the civilians until the end of the day.

Who exactly were the members of this ’Continuity Government’ and what did they do during the time they were in power? We still don’t know. The members of Congress who asked the question were not allowed to hold a session of their assembly on the subject.

Please understand that until we have clarification, the 9/11 controversy will continue. The procedure implemented on September 11 was designed by President Eisenhower at a time when nuclear war was feared. If he, the Speakers and a majority of Congress were killed, there would be no constitutional powers.

The military would logically have to assume the continuity of government. But this was obviously not the case on that day. Not one elected official was dead. The transfer of power was therefore unconstitutional. It was strictly speaking a coup d’état.

THE ATTACKS OF SEPTEMBER 11

The 9/11 Official Story Crumbles:  In my book and afterwards, I hypothesised about what really happened on that day. But this is irrelevant to my point.

The people who perpetrated this crime wanted to create a shock comparable to Pearl Harbor, as the members of the Project for a New American Century wrote earlier, so that they could change the way the United States lives and functions. So they told us a tall tale that we swallowed without flinching. But:

• To this day, there is no evidence of the 19 designated hijackers on board the hijacked planes. They were not on the lists of passengers on board the planes released by the airlines on the same day. The videos of the hijackers at the airport were not taken in New York, but at other airports where they were transiting.

• To date, there is no evidence that the 35 telephone communications between passengers on the hijacked flights and the ground existed [8].

In contrast, at the trial of Zacarias Moussaoui (accused of being the 20th hijacker who would not have boarded the plane), the FBI testified that none of the planes had phones in the armrests, that passengers should have used mobile phones, that cell phones at the time could not work at altitudes above 5,000 feet, and that the records provided by the phone companies did not show any of the communications mentioned – including that of Attorney General Olson.

• To date, there is no physical explanation for the collapse of three of the World Trade Center towers onto their own footprints (i.e. vertically). The Twin Towers were hit by two planes, but were not shaken. However, their fuel would have run down the vertical beams and melted them.

A third tower was destabilised by the fall of the first two to its side. It too would have collapsed, not laterally, but vertically. It should be noted that no explanation was given for the lateral explosions heard by the firemen and widely filmed, nor for the vertical beams that were severed and not melted; two pieces of evidence attesting not to an accidental but to a controlled demolition.

It should also be noted that no collapse of skyscrapers has ever been observed, either before or after 9/11, following a large-scale fire… and that no one has learned the lessons of this attack and therefore changed the way such buildings are constructed to prevent such a catastrophe.

Finally, the photographs taken by firefighters of “pools” of molten steel and those taken by FEMA (the disaster management agency) of the melting rocks in which the foundations were built are inexplicable according to the official version.

• To date, there is no evidence that an airliner hit the Pentagon. Already the next day, the fire brigade had given a press conference at the Pentagon during which they had attested that they had not found anything suggestive of a plane. The authorities, who had issued a vengeful statement against my book, announced that they had collected many parts of the plane and reconstructed it in a hangar.

Then they stopped communicating on this subject. Moreover, the families of the passengers of the plane in question, after having been scandalised by my words, changed their minds when they were given back funeral urns, claiming to have identified the bodies of their relatives thanks to their fingerprints (which would have been totally destroyed during fires at those temperatures).

Some refused to sign the confidentiality agreement offered to them in exchange for large compensation payments.

[2] According to my detractors, I had not been at the scene, as a ” true journalist ” would have had to. But the United States had banned access to the three “crime scenes” for reasons of ” national security ” and for years no journalist, from absolutely no media, had access to them. So the reproach of ” amateurism ” would have to apply not only to me but also to all the journalists who repeated the official version.

[3] The adjective ” conspiratorial ” began to be used in the 1960s to designate those who questioned the official thesis of the lone sniper who supposedly assassinated President Kennedy and denounced that what he did was a conspiracy. possible that assassination.

[4] Indeed, I deny the official version of the attacks of September 11, 2001. But the term ” denialism ” actually alludes to an extreme right-wing current – whose ideas I have always fought – that denies the will of the Nazis to perpetrate the genocide of the Jews in Europe.

[5] Against All Enemies, Inside America’s War on Terror, Richard Clarke, Free Press, 2004.

[6] Like every year, Warren Buffet – who was then the richest man in the world – gave a charity dinner in Nebraska. But, something that had never happened before, that day the annual dinner was not organized in a large hotel but … in a military base. The invited company bosses had given their New York employees the day off, which explains the relatively low death toll in the collapse of the Twin Towers.