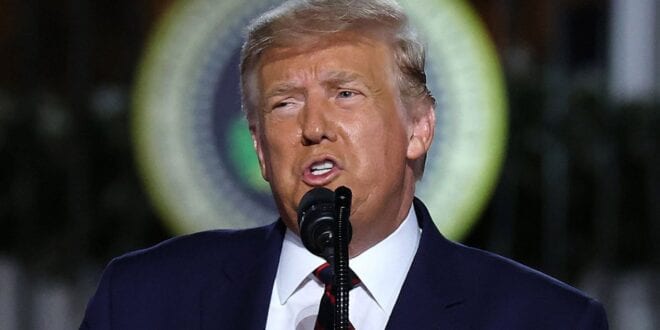 Herland Report: Trump incited insurrection: Media allegations are sufficient proof these days: A central element in classical Western jurisprudence has been to legally establish who is guilty before accusations are to be believed as fact. Both parties are to meet in a court of law, where evidence is presented and the accused only convicted if the evidence is sufficient.

This principle is no longer the case in the Western media. For years now, we have seen how allegations presented in the media are treated as proof that a person is guilty.

As the socialist group pressure builds up to condemn Trump, even if the evidence has not been presented and the case not tried in a court of law, even individuals who themselves in history have been falsely accused of wrongdoing and suffered much from false accusations, now nonetheless support the inquisition against Trump. It is baffling to watch.

When injustice is done to others, it seems to be quite fine, especially if one benefits from agreeing with the leftwing mob’s group think and be warmly welcomed in social settings as a result.

No court of law has so far decided whether president Trump incited violence or not.

Why then believe the media’s self-appointed set of judges, when we all know how partisan they are? As the US media is owned by the enemies of Trump, why not let the legal system first establish what happened before we make up our minds.

Rachel Alexander, WND: I didn’t really want to write this article, since I’ll probably be banned faster from big tech than expected, but as a lawyer whose favorite area of law is constitutional law, I feel a duty to.

The left is trying to get rid of President Trump before the end of his term, saying he incited an insurrection in the speech he gave near the White House on Jan. 6. House Democrats have drafted Articles of Impeachment with over 150 sponsors.

Dozens of Democrats and some Republicans are also calling on Vice President Mike Pence and the Cabinet to remove Trump through the 25th Amendment, saying he is no longer fit for office.

The Articles of Impeachment say Trump shall be removed for treason, bribery or other high crimes and misdemeanors under the 14th Amendment, which prohibits the president (as well as the vice president, Congress and state legislators) from engaging in insurrection against the Constitution.

They use a lot of vague, lofty language but are short on specifics. They say he “gravely endangered the security of the United States government.”

They claim he “threatened the integrity of the democratic system, interfered with the peaceful transfer of power, and imperiled a coordinate branch of government.” What do they cite as his dangerous words? Saying he won the election by a landslide.

He encouraged “imminent lawless action” that “interfered with the peaceful transition of power.” They assert that he will “remain a threat to national security, democracy and the Constitution if allowed to remain in office.”

Does this meet the definition of incitement under the criminal code? In the past, Congress has looked to the criminal code to weigh impeachment offenses. The Supreme Court case Clarence Brandenburg v. Ohio established the legal standard for violent speech, which is speech that is “directed to inciting or producing imminent lawless action and is likely to incite or produce such action.”

Trump incited insurrection: Media allegations are sufficient proof these days: So let’s look at what Trump actually said: “I know that everyone here will soon be marching over to the Capitol Building to peacefully and patriotically make your voices heard.” This is the opposite of inciting violence. This is speech protected under the First Amendment. In fact it is the heart of free speech, the right to march in political protest.

As for remaining a threat if he stays in office and thwarting the peaceful transition of power, the Democrats failed to mention in their Articles that after the violence started, Trump tweeted twice denouncing it, then followed up with a video denouncing it again. He conceded the election, saying his “focus now turns to ensuring a smooth, orderly and seamless transition of power.”

Allan Favish, writing for The American Thinker, observed that the break-in occurred before Trump’s speech ended, and most people at the Capitol building could not hear Trump’s speech near the White House, nor did they appear to be watching it on their phones. Plenty of videos circulated later showing Capitol police letting the protesters in peacefully and even pointing out where they should go once inside the building.

Trump incited insurrection: Media allegations are sufficient proof these days: Constitutional law professor Jonathan Turley, a longtime Democrat who is considered fair, observed, “While I was highly critical of the president’s remarks, he never actually called for violence or a riot. Indeed, he expressly told his followers ‘to peacefully and patriotically make your voices heard.’

He said, ‘Let us walk down Pennsylvania Avenue.’ Such marches are common in both federal and state capitols.” He noted that under the Democrats’ standard, “any president could be removed for rhetoric that is seen to have the ‘natural tendency’ to encourage others to act in a riotous fashion.” He warned that to impeach him over this would create a dangerous precedent for free speech.

Laurie Levenson, a professor of law at UCLA and a former assistant U.S. attorney in Los Angeles, is also skeptical that Trump’s statements are prosecutable. Renato Marriotti, a former federal prosecutor and legal affairs columnist for Politico, said “Mere encouraging words would not be enough.”

Democrats’ accusations are stunning considering their leaders’ encouragement of violent Antifa and BLM rioters this past summer. Vice President-elect Kamala Harris encouraged her millions of Twitter followers to donate to a fundraiser that paid bail for accused rioters.

Biden staffers did too, and nothing happened to them. Antifa wants to overthrow the Constitution. BLM is a Marxist movement. Additionally, in 2018, Biden said about Trump, “If we were in high school, I’d take him behind the gym and beat the hell out of him.”

And how many currently elected members of Congress and state legislators – who could also be impeached for inciting insurrection – have said far worse than Trump?

In 2018, Pelosi complained about the separation of illegal immigrant family members at the southern border: “I just don’t even know why there aren’t uprisings all over the country. And maybe there will be, when people realize that this is a policy that they defend.” Last September, she referred to Trump and Republican members of Congress as “domestic enemies” and “enemies of the state.”

“Squad” member Rep. Ayanna Pressley, D-Mass., called for “unrest in the streets.” When Minneapolis was burning because of rioters, another Squad member, Rep. Ilhan Omar, D-Minn., tweeted, “Our anger is just. Our anger is warranted.”

Missouri Democratic State Sen. Maria Chappelle-Nadal said she hoped Trump was assassinated. She continued to serve out the rest of her term, over another year. If Trump can be impeached, then many others should have been too.

Twitter permanently banned Trump over the accusations, citing “risk of further incitement of violence.” This is bizarre, considering how many thousands of people Twitter has allowed to remain on the platform despite threats of violence.

Twitter allowed the rioters last summer to discuss where to attack and where the good looting is. Nothing happened to Omar for her tweet; it’s still there without even a warning. Verified Twitter users were allowed to threaten violence against conservative high school kids a year ago.

The left is far more guilty of inciting violence than Trump, but they have the MSM behind them to focus all the attention on Trump, and big tech behind them to punish him and the right. Big tech is now using the Capitol break-in to speed up the purge of conservatives, attacking us on multiple levels including at the roots of the internet, which I will address how to combat next week.

Rachel Alexander is a senior editor at The Stream. She is a political columnist and the founder and editor of Intellectual Conservative. Alexander is a regular contributor to Townhall and The Christian Post. She was ranked by Right Wing News as one of the 50 Best Conservative Columnists from 2011-2017.