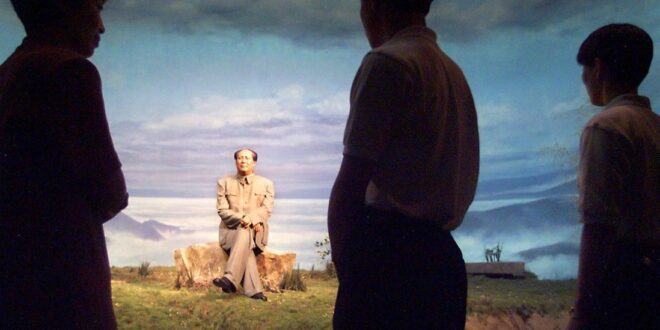 “Mao qualifies as the greatest mass murderer in world history,” says Frank Dikötter, an expert with unprecedented access to the Communist Party archives.

Dikötter explains in his book, Mao’s Great Famine; The Story of China’s Most Devastating Catastrophe, that around 45 million people were starved, beaten to death or killed in prison camps in China between 1958-1962. Bear in mind that the death toll from World War II was around 55 million.

The Hong Kong-based historian said he found that during the time that Mao was enforcing the Great Leap Forward in 1958, in an effort to catch up with the economy of the Western world, he was responsible for overseeing “one of the worst catastrophes the world has ever known”.

Respect for human life and the working classes was horrifyingly low, very much to the contrary of the idealized official Communist slogans which stated the very opposite: that the worker was to be protected from abuse and elevated.

Since President Biden keeps quoting the Communist leader, one may humbly assume that Biden respects Mao and endorses his work, or else he would obviously not repeatedly have referred to the authoritarian leader.

Black Lives Matter openly endorses atheist Marxism and the U.S. university systems are now being modelled after the same revolutionary thought. Let us therefore take a quick look at who Mao Zedong was.

Mao Zedong and China: Mao was a stern fan of big government, dictatorial rule over the people, zero respect for free speech and private property rights, as well as a stern hater of traditional ethics and religion.

Typically Marxist, his speeches were filled with praise of the regular worker, promising freedom and a new world order that would bring wealth to all.

In short, the radical Chinese Communist leader was a supporter of the main Marxist ideals that now engulf American elites, in the country’s historic turn towards state and population control.

Even Russia’s strong man, Vladimir Putin now compares the developments in America to that of the State Atheism and Communist Soviet Union, before the mastodont fell.

In the U.S., some raise eyebrows at Biden’s Mao fetich, but should not, as the U.S. political system over the past years have substituted its former traditional, Western values with the radical views of the neo-Marxist New Left 1960s ideology.

Precisely big government control is now the popular mainstream in America. Read more about this in my book New Left Tyranny, available on Amazon.

The neo-Marxist New Left elites now team up with the 1% richest capitalists in the world, the very same who benefit from globalism, amassing wealth into the hands of the very few.

Mao Zedong and China: Sixty-two individuals owned more than 50% of world assets, said Oxfam back in 2016. Wonder what the figure would look like today. This is what globalism led to, while the general public was fed the message that “globalism eradicates poverty.” The exact opposite happened.

Frank Dikötter’s book tells: “Between 1958 and 1962, China descended into hell. Mao Zedong threw his country into a frenzy with the Great Leap Forward, an attempt to overtake Britain. The experiment ended in the greatest catastrophe the country had ever known. The Great Leap Forward also became the site “the greatest demolition of real estate in human history,” as up to one-third of all housing was turned into rubble.”

What remains to be seen is if a private property crisis and massive change of private ownership from the middle class to the 0.01 % is the next stage in America.

As private billionaire capital merge with state funds in the new, no government system has been better at keeping check on private citizens than Marxist ruling elites.

In the Soviet Union and Eastern European states, the system demonstrated during the Cold War how intimidating big government can be, how successful the socialist, group think was in quenching free speech, free media, free government, free capitalism, free property rights and free citizens.

The censorship system skyrocketed as the public lived in fear of the Communist Big Brother and its agents. Those who disagreed with the state rulers lost their jobs, their livelihood, were trashed in the media, lied about, harassed, sent to the Gulag prison camps, killed etc.

Previous Communism in America: Is it Terrorism to disagree with the Government?
Next Covid Vaccines are Epic Failure: Does not protect, kills more