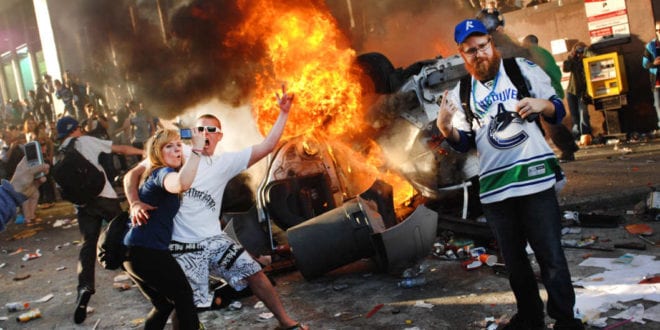 Herland Report: Insouciance Destroyed America: Most Americans have no idea how far gone their country is.

We not only have the Biden regime announcing solidarity with BLM and flying the BLM flag at US embassies and consular missions, US military recruitment videos stressing recruitment of lesbian females, men dressing as women,

and Americans having their genitals removed so they can become “no gender”, we have Democrat school systems teaching white people self-hate and infusing them with guilt and making them effective agents in reconstructing America as a racial caste system favoring blacks, writes Dr. Paul Craig Roberts.

Insouciance Destroyed America: In the Spring 2021 issue of City Journal published by the Manhattan Institute, Christopher F. Rufo documents with their own words and deeds how the Oregon public school system has abandoned education for cult indoctrination.

Rufo focuses on the school systems in Tigard-Tualatin, Beaverton, and Portland where white Americans account for 98-99 percent of the population.

Using their own documents and official statements, he shows that the purpose of the education bureaucrats is to destroy the confidence of white students and infuse them with “white guilt,”  “white shame,” and self-loathing.

A hate speech code is institutionalized, the purpose of which is “to pathologize any political opposition to the new order.”  The cause of oppression is “whiteness” and white values of color-blindness, individualism, and meritocracy.

In place of advancement by merit there is to be advancement based on “equity,” which means outcomes that favor blacks independently of merit. Color-blindness is denounced as a white trick to uphold a merit-based system.

Individualism is to be replaced with group think described by Facebook’s Mark Zuckerberg as his ideal where everyone complies with group thought controlled by him and a handful of others of the “new order.”

The New York Times’ 1619 Project has allied American media with the attack on the United States Constitution.

According to the New York Times and the Oregon public school system, the Constitution is a racist document written for the sole purpose of institutionalizing black slavery in the foundation of the American state.

As Rufo notices, “We have reached the strange reality in which the state, through the organs of education, agitates for its own destruction. Educators have condemned the entire structure of the social order and celebrated those who would tear it down.”

It is clear that white liberals have succeeded in destroying the belief of many Americans in the rule of law and the Constitution by denouncing these historic achievements as “tools of white supremacy.”

Some red states have passed laws prohibiting the teaching of the demonization of white Americans in their states.  What is likely to happen is that the presstitutes, the intellectuals, and the anti-white US Department of Justice will overthrow the state laws as a form of McCarthyism that prohibits freedom of expression.

Insouciance Destroyed America: In other words, freedom of expression is limited to denunciation of the founding values of the United States as white supremacist and white Americans as “systemic racist oppressors.”

Today the states are disunited between blue and red to a far greater extent than they were in 1860.  There are two countries today occupying the same geographical location.  One, the red states, believe in America and its founding documents.  The other, the blue states, believe that America epitomizes white supremacy evil.

The message is clear. From the Democrats the message is that white Americans must submit to blacks whom they have wronged.  From the Red States the response is that whites freed the blacks from the slavery that their black brothers sold them into, whites passed the 1964 Civil Rights Act and the 14th Amendment to the US Constitution that guarantee blacks equality before the law. The claim that white Americans denied these protections to blacks is a lie by traitors guilty of treason who intend to overthrow the United States of America.

The only way out of this is civil war. We will learn if the red states have enough confidence and will to defend the Constitutional rights of white Americans.

Otherwise we will have, as was predicted some years ago, a “dispossessed majority.”  White Americans could be dispossessed not only of their legal and Constitutional rights, but also of their lives.