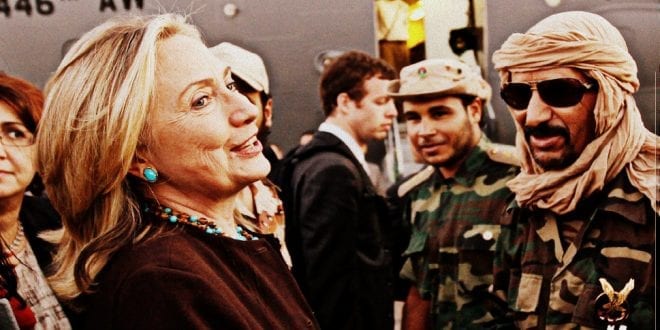 Share
Herland Report: The political and investigative similarities between the TWA 800 and Hillary Clinton server cases, as well as the anti-Trump investigation, are eerie and deeply disturbing.
Let us talk about the FBI’s involvement in the greatest political crime in America’s history through its pivotal role to undermine Donald Trump’s presidential campaign, and in the blatant cover-up of Hillary Clinton’s crimes as secretary of state, writes senior investigator at Judicial Watch, William F. Marshall at The Federalist. (Photo: Foreign Policy)
He is also a contributor to The Herland Report TV on YouTube, watch one of the interviews here.

While recently watching a documentary on the Smithsonian Channel about a 1987 plane crash in California purportedly caused by a deranged passenger, I realized a profound shift had occurred in my accepted wisdom, my “worldview.”

During its investigation of the crash, the FBI allegedly found a vital piece of evidence at the scene, which led to them identifying a suspect behind the crash.

It dawned on me that I doubted the veracity of both the evidence the FBI supposedly found and of the documentary itself.

Then I realized that my doubt was purely a result of everything we’ve learned about the FBI’s involvement in the greatest political crime in America’s history through its pivotal role to undermine Donald Trump’s presidential campaign, and in the blatant cover-up of Hillary Clinton’s crimes as secretary of state. It also brought home why President Trump needs to reopen the 1996 TWA Flight 800 plane crash investigation.

Thanks to James Comey, Andrew McCabe, Peter Strzok, Lisa Page, and an ever-enlarging cast of hapless characters, my illusions about the FBI have been shattered. The FBI is no longer sacrosanct.
The enormity of what we are discovering about the role of the top leadership of the Obama administration to create and salt bogus “intelligence” into the U.S. national security establishment to spy on, investigate, and try to undermine the opposition party’s presidential candidate is staggering.

That Brings Us to TWA Flight 800

The FBI’s willingness to participate in such outrageous cover-ups and falsely predicated investigations, and ignore a mountain of evidence contradicting the official government line, should prompt President Trump to revisit what I believe is one of the other great cover-ups in American history, also involving the Clintons: the destruction of TWA Flight 800 on July 17, 1996.

It was destroyed off the coast of Long Island shortly after taking off from John F. Kennedy International Airport bound for Paris, taking 230 souls with it. That scandal presaged what we saw 20 years later with the whitewash of the Hillary email server case and the counterintelligence operation against Trump’s campaign.

The seminal work about TWA 800 was written by a meticulous, indefatigable investigative reporter and documentarian, Jack Cashill. (Full disclosure: I have gotten to know and work with Jack, a fellow graduate of Regis High School in Manhattan, over the years, and consider him a friend.)

Jack’s latest book on the subject, 2016’s “TWA 800: The Crash, the Cover-Up, and the Conspiracy,” methodically lays out an overwhelming case that the Boeing 747’s destruction was not caused by a random, anomalous spark in the center fuel tank filled with vapors, as the government’s “investigators” contended, but that it was brought down by a missile, in all likelihood fired inadvertently during naval warfare exercises taking place off Long Island in those waters in the time frame of the crash.

Many Investigators Have Questions

Many other serious, credible investigators have dug into the mystery surrounding TWA 800’s destruction.

Journalist James Sanders and his wife, Liz, a TWA flight attendant who knew many of the TWA 800 victims, actually were prosecuted by the government and convicted for having materials they’d received from TWA 800’s remains tested for missile residue, the presence of which was confirmed.

A tremendous number of related records have been revealed in the 22 years since that tragedy and its cover-up, which Jack has pored over and detailed in his book. They raise so many questions about the disaster’s true nature.

The evidence contravening the government’s conclusion that it was an accident is too voluminous to detail here, but it includes the following: More than 250 eyewitnesses (including pilots) who saw at least one missile attack the aircraft, nearly 100 of whom saw it rise from the surface of the ocean; scientific analyses debunking the CIA’s ridiculous animated video positing the absurd theory that the crippled aircraft with its nose blown off was able to “zoom” upwards more than 3,000 feet, defying all known laws of physics; and an underwater debris field inconsistent with the on-board explosion (as opposed to missile strike) theory of the plane’s destruction.

To those who can’t envision our highly advanced, technologically unsurpassed Navy being capable of mistaking a huge, civilian airliner for a drone practice target, one has only to look back eight years earlier, to July 1988, to see something very similar, when the U.S. Navy accidentally shot down Iran Air Flight 655, an Airbus A300, over the Persian Gulf, killing 290 civilians. Weapons systems and military operations are highly complex and, simply put, accidents happen.

Yet Another Clinton Cover-Up?

Why would the government engage in a massive cover-up in late 1996, involving multiple agencies, including the FBI, CIA, and National Transportation Safety Board, to disguise the fact that the U.S. military had accidentally shot down a civilian airliner?

Probably for the same reason that multiple government agencies, like the FBI and DOJ, would torpedo an investigation into egregious violations of law by a secretary of state running highly classified national security information over an illegal personal server: to ensure that a Clinton won an upcoming presidential election.

To be sure, the great majority of investigators in 1996, perhaps even in 2016, had no idea they were serving an illicit cause, but a handful at the top most certainly did. How else to explain the cooperation of the CIA and FBI on the TWA 800 investigation from day one?

Neither had any legitimate role investigating a domestic plane crash. Just as troubling, the Clinton DOJ’s infamous “wall” memo forbade the two agencies from sharing intelligence.

Imagine Bill Clinton in July 1996, fewer than four months before his reelection bid against Sen. Bob Dole, having to go before the American people to admit that the Navy under his watch had accidentally shot down a civilian airliner filled with 230 innocent men, women, and children. Similarly, imagine Hillary Clinton being prosecuted by the Obama Justice Department just months before her own presidential election. Not going to happen.

The political and investigative similarities between the TWA 800 and Hillary Clinton server cases, as well as the anti-Trump investigation, are eerie and deeply disturbing.

In light of everything that we have learned that senior officials in our law enforcement and intelligence agencies are willing to do to protect a favored political candidate through the incessantly texting lovers, FBI agent Strzok and FBI attorney Page, the damning DOJ inspector general’s report on the handling of the Hillary Clinton email server investigation, and Comey’s smug, self-righteous testimony, we need to face this truth: conspiracies of the most egregious sort can and do occur among the powerful governing elite of our country.

Certainly if the FBI were willing to whitewash intelligence information abuses that would send any other American to prison for many years, all to benefit Hillary Clinton, and if multiple agencies were willing to collude to mount an utterly fabricated counterintelligence operation against a U.S. presidential candidate to benefit that same Hillary Clinton, they would be willing to tank an investigation of an accident that would benefit her husband, Bill Clinton.

The FBI must be torn out, root and branch, and reconstituted under new management, a new name, and with new safeguards to ensure these sorts of abuses of its power and resources do not continue.

Before that can occur, however, the agency’s sins must be exposed to the light. The families of 230 victims of an horrific disaster deserve as much. Mr. President, re-open the investigation into the cause of the TWA 800 crash.

William F. Marshall has been an intelligence analyst and investigator with the Drug Enforcement Agency (DEA), private and non-profit sectors for over 30 years, currently a senior investigator for Judicial Watch, the most successful US public watch dog investigating government corruption and the abuse of power. Marshall has taken part in investigations in some 40 countries before joining the team at Judicial Watch.

Previous TV interview: Selfishness is destroying us, says US musician and pastor Ray Bady
Next Marxist Black Lives Matter says it is anti-democracy