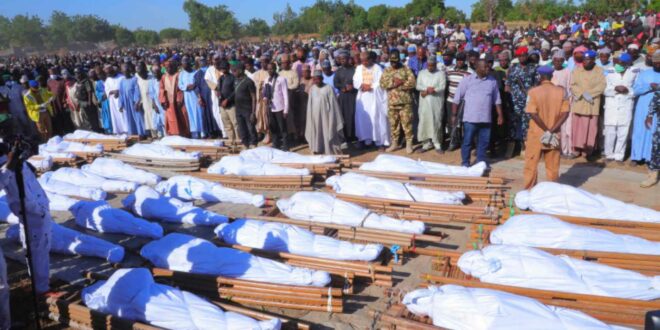 Will Christian Black Lives Ever Matter to Marxist Black Lives Matter? The Ignored Genocide in Nigeria

Christian Black Lives: All throughout sub-Saharan Africa — in Nigeria, Mozambique, the Central African Republic, Mali, the Democratic Republic of Congo — Muslims are terrorizing and slaughtering Christians, and have been for many years now, writes Raymond Ibrahim, a prominent Islamic scholar, bestselling author and regular contributor to The Herland Report.

Nor is there any hope on the horizon, for problems that cannot be correctly and objectively addressed are doomed to persist in perpetuity.  As far as the Western “mainstream” is concerned, all such persecution and terrorism is a byproduct of economic grievances — or, in the words of an April 16, 2021 report, titled “How poverty and corruption fuel terrorism across Africa,”

On March 24th, a group of jihadis struck the town of Palma in Mozambique, killing dozens and burning government buildings to the ground.  ISIS claimed responsibility for the attack — but doubts have been cast over who was behind the siege[.]

The remainder of the report argues that such attacks, which  “are on the rise across the African continent,” are “a consequence of poverty, domestic grievances new and old, and Africa’s resource ‘curse,’ which paradoxically impoverishes people living on land which is rich in natural resources.”

This has been the mainstream media’s argument, and they’re sticking to it — no matter all the mountains of contradictory evidence.

Will Christian Black Lives ever matter: Take the little-known genocide of Christians that has long been going on in Nigeria.  “Not less than 32,000 Christians have been butchered to death by the country’s main Jihadists” between just 2009 and the first quarter of 2020.  According to the most recent report, between January and April of this year alone, 1,470 Christians were hacked to death.  On average, this comes out to about 368 Christians killed every month for four months straight.  Since just 2016, 13,000 churches have been destroyed by “Allahu akbar”–screaming Muslims.

The full name of Boko Haram, the premier terror group that dominates northern Nigeria, is “Sunnis for [Islamic] Propagation and Jihad.”  “Boko Haram,” their nickname, means “Western education is a sin” (not “we kill because we’re poor”).  Their stated goal is the establishment of a pure sharia state in Nigeria and the brutal subjugation or slaughter of the nation’s Christians.  Moreover, the Muslim Fulani herdsmen, who in recent years have terrorized more Christians than even Boko Haram, are acting on jihadi teachings and hate for Christians.

Will Christian Black Lives ever matter: Despite all this, the Western “mainstream” remains committed to describing the jihad in Nigeria — and increasingly all throughout sub-Saharan Africa — as a byproduct of “inequality” and “poverty,” to quote Bill Clinton, when once explaining what is “fueling all this stuff” (“stuff” being a reference to the aforementioned genocide of Christians in Nigeria).

Or, in the words of Barack Obama’s assistant secretary of state for African affairs, Johnnie Carson, speaking after the bombing of a church that left nearly forty Christian worshipers dead on Easter Sunday, 2012 — one of countless churches to be burned or bombed before and since that Easter: “I want to take this opportunity to stress one key point, and that is that religion is not driving extremist violence” in Nigeria.

But as the Nigerian nun Sister Monica Chikwe once observed, “[i]t’s tough to tell Nigerian Christians this isn’t a religious conflict since what they see are Fulani fighters clad entirely in black, chanting ‘Allahu Akbar!’ and screaming ‘Death to Christians.’”

Similarly, the Christian Association of Nigeria once asked: “How can it be a [secular or economic] clash when one group [Muslims] is persistently attacking, killing, maiming, destroying, and the other group [Christians] is persistently being killed, maimed and their places of worship destroyed?”

Such is the current state of affairs: a jihad of genocidal proportions has been declared on the Christian population of Nigeria — and has since spilled over into several other sub-Saharan nations — even as Western media and analysts present Nigeria’s problems in purely economic terms that defy reality.

The inability to accept these straightforward facts; the inability to factor ideological or existential motives, seeing only material motives (money, land, etc.); the almost instinctive conclusion that Muslim violence is proof positive of a legitimate grievance — all of these are so ingrained in the predominant paradigm, from the mainstream media to mainstream politicians, and all of these are poisoning Western civilization from within, and eroding its influence and capacity to act from without.

And, in the context of what is happening in Nigeria and other sub-Saharan states, it means that, for Western media and politicians, black lives most certainly do not matter—at least not when they’re Christian, and being terminated by Muslims.

Will Christian Black Lives ever matter: Also check out these topics at CNN or FOX News. Other sources may be New York Times, USA Today, the Washington Post or from the British angle, BBC, The Guardian, The Telegraph or Financial Times.