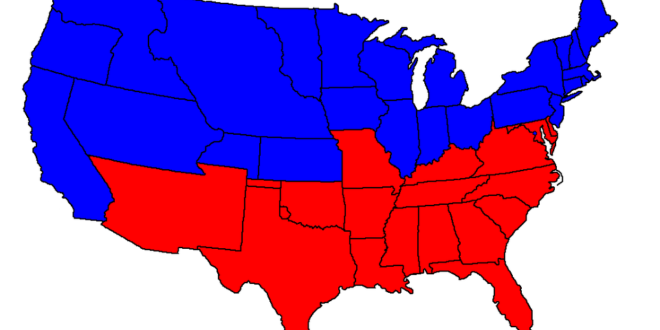 The end of the United States? 66 % of Southern Republicans want to split the country

Herland Report: The end of the United States? A new poll shows that 66% of Republicans in southern US & nearly half of West Coast Democrats want to secede from country as division grows.

Needless to say, a further weakened US will weaken the Western hemisphere and push the geopolitical shift further towards a steadily growing stronger China.

The question is now whether some states will withdraw formally from the membership of the federal union, as an alliance of Southern States grow more weary of Washington’s woke policies.

The United States seem more divided than ever in the wake of new draconic measures threatened to be imposed as the Covid crisis widens.

The end of the United States? Bright Line Watch writes: “As the country turns 245 years old, Americans have reasons to worry about the state of their democracy. In June 2021, we surveyed a representative sample of Americans and an expert sample of political scientists on the performance of U.S. democracy, the threats it faces, and how their political representatives should address these matters.1

We find deep partisan polarization in perceptions of what is right and wrong with American democracy and the steps that should be taken to fix it. In addition, experts express reservations about current changes to election law at the state level.

Still, we find some signs that Americans regard partisan attacks on election administration with skepticism.

Distressingly high proportions of respondents say they would be willing to secede from the United States to join a new union of states in their region. Support is higher among Republicans in Republican-dominated regions and among Democrats in Democrat-dominated regions, but the idea’s popularity has risen in some partisan groups and regions of the country since Biden’s inauguration.”

44 % among Southerners support secession, 66 % among Republicans hope to create a new nation, apart from Washington. 20 % of Democrats in the region also support the move to secession.

The end of the United States?  Also check out these topics at CNN or FOX News. Other sources may be New York Times, USA Today, the Washington Post or from the British angle, BBC, The Guardian, The Telegraph or Financial Times.

The level of censorship in social media and search engines is all-time high. Do like thousands of others, subscribe to The Herland Report newsletter here! Led by Scandinavian bestselling author, Hanne Nabintu Herland, The Herland Report news and opinion website provides independent analysis from leading Western intellectuals and ground breaking YouTube interviews, cutting through the mainstream media rhetoric. It is a great place to watch interviews and read the articles of leading intellectuals, thought leaders, authors and activists from across the political spectrum. The Herland Report believes in freedom of speech and its editorial policy resides above the traditional Left vs Right paradigm which we believe has lost its relevance and ability to describe the current driving forces in Western politics.
Previous Zindan leader who captured Dr. Saif al-Islam: 2/3 of Libyans favor return of Gaddafi
Next The United States will cease to exist as a nation, divided in blue and red states?