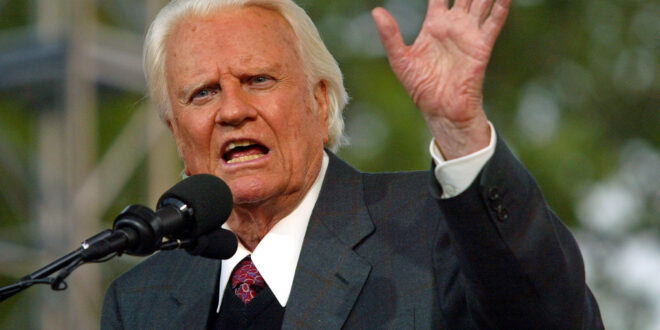 The American Sodom and Gomorrah: How to avoid the Fall

Herland Report: The American Sodom and Gomorrah: Among the founding values of Christianity is the requirement to love one another and equality regardless of class, creed and gender. Yet, today Christian values are scorned and we are living through a remarkable period of cultural decay.

The dominant values are now the very opposite of those suggested by Reverend Martin Luther King as he dreamed of unity for America. He spoke of human dignity, Christian values such as non-violence and the quest to forgive and love, writes Hanne Nabintu Herland, historian, author and founder of The Herland Report. (Feature photo: Billy Graham, AP) Read the article at the Herland regular WND column here.

The effects of the Western spiritual implosion is evident in the tragic misery of millions: The explosion of mental health issues, broken families, drug epidemics, suicide, homelessness, poverty and economic decline makes many question the New Left atheist values that have been implemented the past decades.

The current focus on race-theories reminds us of Germany during World War II when people also were categorized by the color of their skin, not their qualities, competence and virtues. The hatred among sub-groups in society led to horrifying atrocities committed against those who were circled out as “unwanted.” Fear not freedom dominated the NAZI society.

One may ask to what degree is justice upheld today? Who protects the weak? Are political leaders listening to the needs of the people? If not, how did the system become so corrupted, so susceptible to political bribery and selfishness?

The American Sodom and Gomorrah:  Billy Graham, arguably the most well-respected Christian leader for generations in the West, stated in 2014 that America is as wicked as Sodom and Gomorrah ever were, deserving the judgement of God.

He said that if its political leaders did not start to pray again, the country would be sweeping out of control. “God would spare us if we were earnestly praying, with hearts that had been cleansed and washed by the blood of Christ.”

If we are to listen to the renowned Indian philosopher, Mahatma Gandhi, the reason for corruption sadly may be because Christians no longer sufficiently hold up the light of Christ. Of Jesus, Gandhi had this to say: “Jesus, a man who was completely innocent, offered himself as a sacrifice for the good of others, including his enemies, and became the ransom of the world. It was a perfect act.”

He was deeply fascinated by the teachings of Jesus, hailing him as “one of the greatest teachers humanity has ever had.” However, when encountering Christians, he was deterred from turning to Christianity, saying: “If Christians would really live according to the teachings of the Bible, all of India would be Christian today.”

The American Sodom and Gomorrah: Dr. Martin Luther King was a strong admirer of Mahatma Gandhi and wrote in Strength to Love, a book of sermons on God’s divine laws: “A religion that professes a concern for the souls of men and is not equally concerned about the slums that damn them, the economic conditions that strangle them and the social conditions that cripple them, is a spiritually moribund religion.”

So, are we spiritually dead? Many religious communities seem perpetrated by the same egocentric, materialistic, self-absorbed attitude as society in general, representing the exact opposite values of what Jesus himself proclaimed.

As St. Porphyrios of the Eastern Orthodox Church says: “Egotism darkens a person’s mind; it confuses him, it leads him astray. The true Christian religion transforms people and heals them. The most important precondition, however, for someone to recognize and discern the truth is humility.”

I would like to quote the first sentences in the well-worth reading Decision Magazine article by Billy Graham:

“Our nation was founded by men who believed in prayer. When our government was being formed, Benjamin Franklin addressed the chairman of the Constitutional Convention meeting at Philadelphia in 1787, saying, “I have lived, sir, a long time, and the longer I live the more convincing proofs I see of this truth: that God governs in the affairs of men. And if a sparrow cannot fall to the ground without His notice, it is probable that an empire cannot rise without His aid” and “There is but one power available to redeem the course of events, and that is the power of prayer by God-fearing, Christ-believing people. We would adapt the words of Benjamin Franklin to our day and say, “It is probable that a nation cannot keep her freedom without the aid of Almighty God.”

Healing is what we need. It is acquired when Christians again begin to pray, not with the repetition of hypocritical words but with a humble heart and a clean spirit.

It is time to repeat the ancient Jesus prayer that was heard among the early Christians and to this day resound among the Eastern Orthodox Christians: “Lord Jesus, have mercy upon us.”

Previous Interview with Woodley Auguste: The US Prison Industry Injustice must be dealt with
Next What to do about Inflation, according to famous political economist