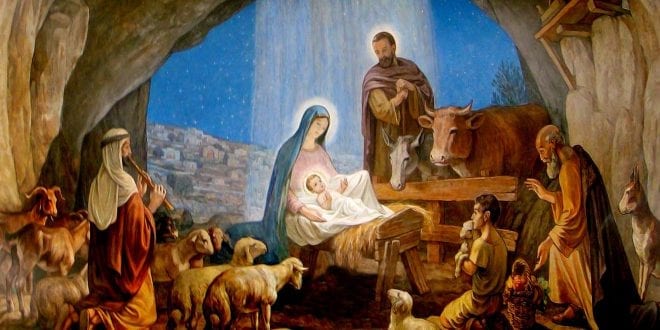 As yet another paganized Western Christmas celebration has come to an end, we are drifting further away from the deeper meaning of existence found in the Nativity of Christ’ story.

Christmas and the most significant person in history: Christmas is now a generic, winter holiday that serves consumerism and atheist pop culture. It is about decorations, mistletoes, chocolates, gift-giving and celebrating evergreens.

Each year, one trillion USD is spent on Christmas gifts and festivities, many going into debt to meet the holiday expectations.

This was recently pointed out by Strategos History’ editor, author Simon Vincent, who explains how Christmas has been “appropriated by secular forces, and redesigned as a time for unrestricted indulgence in food and alcohol, all in the name of Santa.” Christmas, it is claimed, was originally a pagan festival, a Roman Saturnalia hedonist feast or a Yule in Germanic paganism that was “stolen” by the early Christians.

This is a World Net Daily commentary on a series of articles on the origins of Christmas, that may be read here and here and the third article here.

Christmas and the most significant person in history: The drastic reinvention of Christmas has happened over the past 150 years, Simon Vincent points out, as “Santa Claus has replaced Christ and lavish gluttony have replaced the humble Nativity Fast.

Obsessive materialism in the form of stress-inducing gift shopping has replaced charitable care for the poor and sick.

A season for one trillion US dollars in revenue has replaced a season for spiritual reconciliation with God. It is actually the modern man that has copied pagan Saturnalia and called it Christmas.”

The nihilist twisting of historical facts in order to diminish the deeply spiritual meaning of the Nativity story of Jesus, speaks volumes of the diminishing awareness in the West of its own recipe of success in history.

Christmas and the most significant person in history: When re-examining the Christian roots Western civilization, it is impossible to exaggerate the importance of the Eastern philosopher, Jesus’ influence on the West.

It was Christianity that introduced the principle of equality, which unleashed the remarkable idea that each man, regardless of class, gender, race or status has a genuine worth.

Christian theology in the Middle Ages and Spanish scholasticism was the origins of what we call modern human rights.

The founding father of what today the largest religion in the world with over two billion followers, the very image of God – Jesus son of Mary – outlined the solution to civil strife, division, hatred and war.

His message was that of humility and love, opening man’s heart to the realities of the deeper metaphysical dimensions, revealing the meaning of existence in communion with God.

The Christian Christmas message leads man out of this earth’s darkness and chaos, and into the light. It provides a path to save man’s soul from meaninglessness, greed and desperation.

It gives answers to existential, inner questions about the very meaning of life. The entry of God’s existential light into the world is why we celebrate Christmas.

H. G. Wells, the famous English writer, commented: “I am an historian, I am not a believer, but I must confess as a historian that this penniless preacher from Nazareth is irrevocably the very center of history. Jesus Christ is easily the most dominant figure in all history.”

“As the centuries pass, the evidence is accumulating that, measured by his effect on history, Jesus is the most influential life ever lived on this planet,” writes historian Kenneth Scott Latourette.

The revolutionary story of Jesus – all he said and did from his birth in Bethlehem to his death in Jerusalem – is described in the Bible, the Holy Scriptures.

This is the most read book in world history and the most significant book in our civilization.

About this book, the first president of the United States, George Washington, (1732-1799) said: “It is impossible to rightly govern the world without God and the Bible.”

Immanuel Kant, German philosopher, (1724-1804) summed it up the Jesus impact this way: “I believe that the existence of the Bible is the greatest benefit to the human race. Any attempt to belittle it, I believe, is a crime against humanity.”

Previous The correlation between Social Disorder and Christian Decline
Next We have lost politeness, civility, good manners with detrimental effects on society, says Reginald Davis