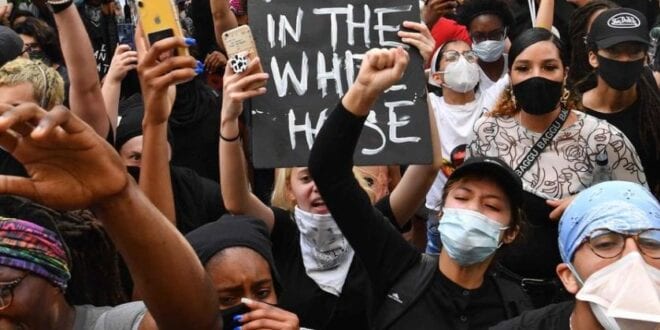 Herland Report: The neo-Marxist movement: It is only recently that most people have come to understand how influenced American society has become by Marxist thought.

Yet, this ideology has been preached for more than 50 years to American youth in schools and universities, demonizing classical, traditional values and substituting these with revolutionary, God hating ideals that have succeeded in destabilizing society.

Whereas the ideal used to be to fear God, respect diversity and love one another – hatred between ethnic groups, rudeness, the break down of national unity now prevail.

At WND, I have had a series of articles on Marxism and how its variant after World War II, namely neo-Marxism, has influenced Western culture with its hatred towards traditional values, writes historian, author and founder of The Herland Report, Hanne Nabintu Herland in her regular column at WND. World Net Daily is the largest Conservative news network in the United States with a wide range of leading commentators as contributors.

This topic is important to study in order to understand how the United States ended up on the edge of self-destruction and came to despise its own, historical values, the very ideals that made the West a great civilization.

Read more about this topic in one of Herland’s latest books: New Left Tyranny. The Authoritarian Destruction of our Way of Life.

How the neo-Marxist movement strangled America: The neo-Marxist, Left wing ideology came – as stated before – out of the Frankfurt School in Germany, and its apostles such as Herbert Marcuse andTheodore Adorno spent years redefining Western values to fit the Marxist view.

The leaders of this movement openly called themselves neo-Marxists or Marxists, introducing the term for the New Left hippie movement that completely engulfed Western universities from the 1960s onward. Few social revolutions have had a better success rate than the neo-Marxist movement in the United States.

It has completely transformed society during the past decades, which is now obvious to the international world watching the dramatic cultural decay as the country is turning into a third world tragedy.

Neo-Marxist movement: At the core of the neo-Marxist project, has been the work to change the meaning of classical Western values to better fit the Marxist agenda. For example, Theodore Adorno worked hard to redefined fascism and Nazism as “right wing”, while in fact National Socialist Workers Party (NAZI) in Germany was Socialist. Is Socialism Right wing? Of course not. Yet, Adorno succeeded in influencing American universities into teaching the NAZI ideology was not Left wing, although even in its very defining term, the German ideology states that it is Socialist.

The work to feverishly erase the memory that intolerant Nazi Socialism was, in fact, left-wing, has been most successful. The Nazi Party stood for a strong centralization of government and power, a rigid culture of consensus, zero free speech, few individual liberties and media indoctrination as a propaganda tool to control the people.

Another term that has been completely redefined by the neo-Marxists is the term “secular”. If you say that you are secular today, many assume that you are an atheist who believes that a non-religious society is the goal. It is understood as a political strategy that seeks to outroot religion as a whole.

Yet, the historical definition of “secularism” meant the very opposite of what it means today: It implied that you were against the discrimination of religious groups and pro religious freedom.

To be secular meant that you respected national sovereignty and the right to national self-determination, that you were for the individual’s right to choose what to believed in – and that church and state should be separate entities. To be secular, meant supporting respect for all faiths – including atheism.

Today, hedonism and drug abuse are elevated as “liberal values”, signifying that liberal means lenient, borderless, constantly following ones feelings.  This is a complete redefinition of the historical term “liberalism,” again to imply the very opposite of its original meaning. To be liberal initially meant respecting differences, supporting religious freedom, free speech, and taking personal responsibility not to hurt others.

These were Conservative values that sought to preserve peace and stability by allowing individuality to blossom under the constraint of demanding politeness, kindness and respect for others. Personal freedom was not disconnected from responsibility.

And today, free speech has become the right to mock, bully and belittle those you disagree with, turning even the concept of free speech into a totalitarian tool to silence opposition.

The leading political economist, Dr. Paul Craig Roberts put it this way in a Herland Report TV interview “Totalitarianism in the West”: “Free speech is becoming associated with fascism because what free speech does is that it allows you to say something that challenges the ruling ideology. And they don’t want to be challenged. So, to protect the ideology from challenge, they call the people telling the truth for fascists. That’s what political correctness boils down to.” And this is how the neo-Marxists succeeded in strangling America.

How the neo-Marxist movement strangled America: Also check out The Rubin Report, Ron Paul Liberty Report YouTube channel, as well as Jordan Peterson, the BBC and FOX on the same topics.